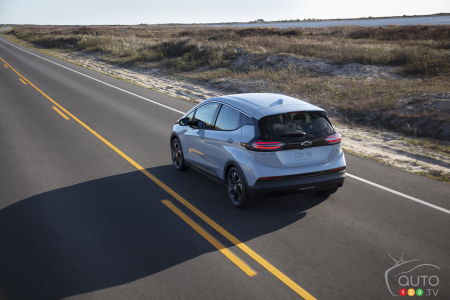 Will the Chevrolet Bolt EV/ EUV Production Resume Next Week?

Well, for one thing, the timing of a release could very well vary by each automaker. If a company has never released a vehicle before then the traditional timeline would hold true. However, other automakers such as Toyota have confirmed that they will be hosting an official launch in the near future. It is still too early to say if the Bolt EV and the Toyota Prius hybrid will be sharing the same stage, but it looks as though there’s a pretty good chance that it will.

As far as pricing is concerned, it will definitely be up in the air. However, most sources have it set at a very affordable level. This means that a potential buyer should really consider how much she or he can afford to spend on a vehicle. If a potential purchase can’t afford the price that has been suggested, it’s likely that they will move on to the next vehicle on their list.

Speaking of other vehicles, GM is also keeping mum on whether or not they plan to release a Chevy Volt and Chevy Cruze next quarter. Reports have indicated that both of these cars will receive their respective launch during the second half of the year, but nothing has been said regarding the Bolt EV. Right now, it appears as though the GMC Canyon and the Chevy Sonic should be able to co-exist quite well. Their performance in the market is what’s most important for the company, and right now, they’re doing just fine.

Right now, the European news source Automobile magazine is saying that “production on the first batch of the new Chevy Volt and Chevy Cruze is set to resume next week”. We’ve heard reports of increased production previously, but this is the first official confirmation. This also means that the end of the Chevrolet’s mass production is fast approaching. Expect to see a lot more of these cars being built at the GM plant in Detroit. It looks as though production may begin on the Chevrolet Bolt EV in the second half of this year.

If you have kept up with the Chinese news over the past few years, you are no doubt familiar with the rumors that have circulated regarding the two electric vehicles that GM had been working on. The reports have consistently implied that the Chinese government would be providing financial support to GM while allowing the company to use China’s own electric car technology in building the Bolt EV and the Chevy Sonic. Well, the Chinese government has now offered contradictory statements, and it appears that the rumors are not being far off the mark.

Today, General Motors confirmed to reporters that “production to resume next week” was not accurate, but did not offer any reason why the production would be halted. Although the GM officials refused to offer a reason why the production would be stopped, they did state that they are in talks with Chinese automotive companies regarding foreign markets for their products. It does not appear as if these negotiations are going very well. In fact, the Chinese automobile market is considered by many to be a very difficult place to enter, due to the current economic downturn.

Although the GM officials did not release the specific details of the discussions, it is safe to assume that the rumors are either completely untrue, or at least are not going to lead to anything concrete. With the uncertainty of what lies ahead for the Chinese market, it is very likely that more details about the new car will continue to emerge, leading to even more confusion. If you have any information on the possible release of a Chevy Bolt EV, you should stay tuned. We’ll keep you updated!